Fishing, a resource at risk

Fishing is an essential resource for Senegal. Economically, fishing exports total nearly 160,000,000,000 CFA francs (240 million of Euros) annually or a total turnover of 2.3% of GDP. Socially, fishing generates nearly 63, 000 direct jobs and employs around 600,000 people. Moreover, fish fills about 75% of protein requirements in a country where meat is becoming more and more expensive and where 40% of children die from malnutrition.

However, in a context of climate change, this sector is now seriously threatened. Rising sea temperatures, the increase in water salinity, coastal erosion and reduced production of phytoplankton (food fish species) have resulted in the modification of ocean currents and reduction of fish from our shores.

1. Poor management of fishery resources: Because there is no scientific inventory of fish, quotas and the management of stocks adapted to the renewal of species cannot be put in place, it is important to respect the ability and time required for the marine biosphere to regenerate. For example, in a decade, the white grouper, sole, shrimp and sea bream have become the most endangered species due to a decrease in fish stock of 50% to 90% depending on the species (source: Center for Oceanographic Research Dakar).

2. Illegal fishing: Whether foreign trawlers without licenses, artisanal fishermen fishing for immature species, or the use of fishing methods that do not conform to international law, illegal fishing in Senegalese waters costs the Senegalese economy 150 billion FCFA ( 230,0 million of Euros) annually. Senegal is thus a victim of a combination of vibrant artisanal and foreign industrial fleets that increase the pressure on the resource. This deprives fish and large mammals of their main diet, causing the disappearance of many species of fish and shellfish, and with them their ecosystems.

3. Lost nets: Since 1998, the use of monofilament or multi-mono-filament nylon nets has been prohibited by Article 30 of the Fisheries Code, yet their import is authorized by the Commercial Code. Decomposing only after 500 years, these nets allow nothing to pass through its netting. Abandoned or lost upon the reefs and wrecks of the sea floor they produce an ecological disaster. Thousands of tons of lost nets choke marine life causing our fish to disappear.

What can be done?

- Establishment of sustainable fishery management systems that include local stakeholders (fishermen and local authorities) to allow for the necessary regeneration of disappearing species;

- Development of new business activities related to fishing to absorb the overflow of fishermen (including product processing);

- Strengthening of controls and sanctions in fishing practices (including the banning the import of nylon nets);

- Creation of a scientific inventory of fisheries resources. 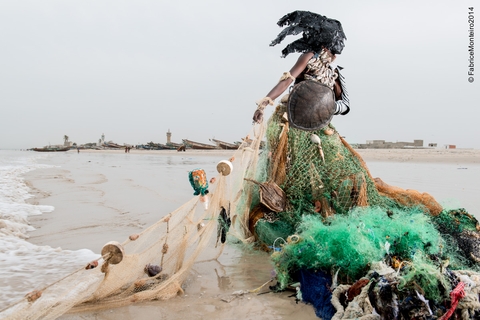