The Prophecy revealed at the World Parks Congress 2014 in Australia !

We invite you to read first the photo legend elaborated by Ecofund in collaboration with Dr Tom Bridge, Research Fellow at the ARC Centre of Excellence for Coral Reef Studies at James Cook University, Townsville and the Australian Institute of Marine Science, and Dr Pascal T Geraghty, Commercial Fisheries Scientist, Australia. A big “thank you” to Tom and Pascal for donating their time and generosity.

Our Prophecy photo series raises awareness about environmental problems in Senegal, West Africa and now in Australia. The Prophecy photo series has included researchers, activists, artists, local citizens and  political decision makers on a participatory and collaborative approach to create accessible, but scientifically based, photo-legends, one of which now presents the Australian Great Barrier Reef , the causes of its degradation and the solutions to the general public.

Together, the Australian “The Prophecy” photo and its legend constitute a plea for the conservation of the reef. They were exhibited yesterday at the WPC.

Located on the north-east coast of Australia, the GBR and its associated ecosystems (mangroves, lagoons, sea grass…) extends for 348 000 km² (along 2,000 kilometres of the Queensland’s coast), and contains the world’s largest collection of coral reefs (almost 2,900 individual reefs and islands of all shapes and sizes), more than 400 types of coral, 1,500 species of fish, and 4,000 types of mollusc. There are also more than 15 species of sea grass, critically important for the ecosystem as they provide nurseries for many fishes and an important food source for grazing animals, such as dugongs (‘sea cows’) and large green turtles threatened with extinction.

The GBR’s coral reefs as we know them today have been around for 25 million years and, being the structural element of the reefs, they are incredibly important to our biodiversity and represent a symbol of life. The northern sector is especially important for indigenous Aboriginal tradition and culture, as it is an essential part of the “soul” of their land.

For all these reasons the GBR was declared a World Heritage Site in 1981 by the UNESCO, and is seen by many as the 8th wonder of the world.

Nevertheless, this site of remarkable diversity and beauty is under threat

The conclusion of the most recent and comprehensive study, published in October 2012 by the American scientific review Proceedings of the National Academy of Sciences, stresses that between 1985 and 2012 – less than 30 years - the GBR lost 50% of its initial coral cover! The study « 27-year decline of coral cover on the GBR » allows us to better understand the main drivers of coral mortality, respectively: tropical cyclones, coral predation by crown-of-thorns starfish (COTS), and the coral bleaching phenomenon.

It is obvious to scientists that changes in ecological, physical and chemical processes, compromising the conservation of marine ecosystems, are largely due to human activities at global and local levels:

- Climate change: warmer temperatures due to changes in ocean currents contribute to the dislocation of coral. Global Warming due to anthropogenic, industrial activities contributes to an increased intensity of tropical cyclones, which destroy reefs; see below a photo taken at Lizard Island about one week after Cyclone Ita in April 2014. You can see the damaged but living coral in the foreground (Courtesy of Dr Tom Bridge); Global Warming also contributes to abnormal increases in ocean temperatures, such as those observed in 1997/98 when the highest phenomenon of coral bleaching was observed. Increasing sea temperatures is also linked to higher rates of coral disease.

- Massive attacks by unusual concentrations of natural predators on the reef (Acanthaster planci, in particular) particularly in the Southern part of the GBR, weaken and can kill the coral. It is proven that fertilisers from sugar cane farms washing into the GBR are the primary cause of these plagues.

- Coral bleaching: In addition to the above reasons, rising atmospheric greenhouse gases in particular lead to stronger stresses on coral. Under such conditions coral can lose their zooxanthellae (a symbiotic coloured algae which absorbs carbon dioxide released by corals and in return provides them with various necessary nutrients), and as a result die of starvation or disease.

- Reduced water quality and contamination: carbonic acid from atmospheric CO2 produced in excess by human activities increases the acidity of oceanic waters, making surface waters more corrosive. At the 12th Conference of Parties to the Convention on Biological Diversity, 30 international marine biologists concluded that "over the last two centuries, the ocean has absorbed a quarter of the CO2 emitted by human activities” and "compared to the pre-industrial period, ocean acidity has increased by about 26%". With more and more toxic substances being released into the oceans (e.g. fertilizers, oil from spills and increased shipping activities…), corals are under increased risk of suffocation.

How to stop the programmed death of the GBR?

An intergovernmental panel on Climate Change predicts an increased frequency and intensity of tropical storms. For the GBR, an unusually high number of severe category 4 and 5 cyclones have been observed recently, and it is predicted they will be more severe, but one powerful cyclone can cause far more extensive damage than many smaller cyclones, and because the damage is more extensive, it takes the reef longer to recover.

Strengthening the resilience (ability of an ecosystem to regain normal functioning after disturbance) and health of the GBR is an emergency, and can be achieved via:

- Reducing sediment and nutrient loads in the water by minimizing runoff from land and banning dumping of dredge materials inside the Marine Park;

- Education about overfishing and its impacts, and encouraging a change in fishing practices: Responsible resource management by local populations the Marine Park plays a vital role.

- The defence of the GBR needs an integrated approach, incorporating all social and economic issues affecting the population, coastal areas and river systems draining into the oceans: Governments and communities should discuss together.

On the one hand economic growth is important: globally, coral reefs are currently a source of indirect income for about 400 million people. In Australia, however, the proposed extension of the mining port at Abbot Point will increase coal exports to more than 70 million tonnes per year, but result in the dumping of three million m3 of sediment and in the rejection of increased CO2 emissions into the heart of the Marine Protected Area.

On the other hand we must now face the reality that our natural resources are fragile and not inexhaustible. 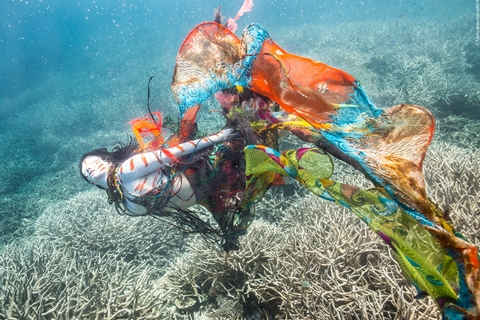 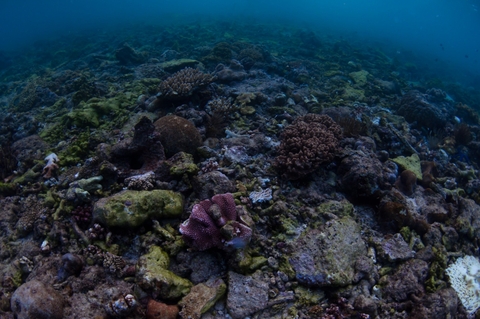