This Sunday morning, there is a certain excitement at the Leopold Sedar Senghor Airport in Dakar, which is usually quiet at this time of the day. A small group of men were working around some large crates. At closer look, these crates do not look like other baggage. High and in light-coloured wood, and inside were seven beautiful turtles!

These furrowed turtles (Centrochelys sulcata) lived a few years in France, but they were flown into Dakar, on September 14, in Lufthansa cargo flights and received by the Senegalese Authorities, the Customs, and the team from the Turtles Village, under the supervision of Mr Lamine Diagne.

It is worth noting that for centuries, African wildlife was shipped to Europe and the rest of the world to supply zoos and private collections. Most turtle species were collected in Senegal, and have, now, disappeared from their natural habitat. This is particularly true of the great Sahel turtle, the furrowed turtle, which can weigh up to one hundred kilograms. Up to now, these turtles are still being sold and sent to Europe by countries like Sudan, making it an important trade for the country, hence the initiative of the Turtles Village in France (SOPTOM) to repatriate these animals to their home country, Senegal, in collaboration with the Noflaye Turtles Village.

We have already talked about the Turtles Village at Noflaye. This unique park in West Africa promotes awareness, amongst visitors, on the protection of turtles. Its personnel also develop programs on the breeding and re-introduction of wild turtles into their natural habitat and this has led to dozens of turtles being released. Repatriated turtles are equipped with transmitters and are continuously monitored by a tracker and Researchers. It has thus been noted that the newly ‘returned’ turtles adapted well to their new environment; births have even been recorded.

This is what we want for the seven newcomers. These turtles will join other turtles at Noflaye to reproduce and increase the reserve of turtles. Later, they are expected to be part of a group of turtles to be released in the Ferlo. For these animals that have always known the European climate, one can imagine that treading the African soil and living in the Ferlo environment will be a great moment for them. Each and everyone gets back what has been confiscated: the turtles will regain their natural habitat ... and Senegal a part of of its wildlife heritage! 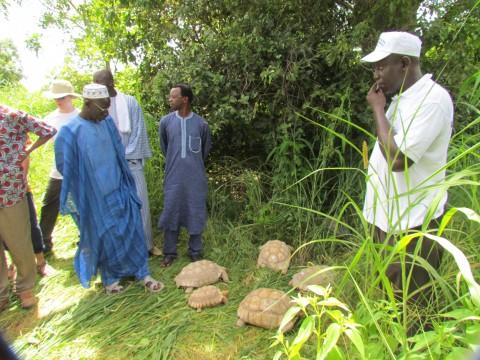