It is in Noflaye, near Lac Rose (Pink Lake) to the North East of Dakar, that Lamine has created the Turtles’ Village, a center where he has sheltered, fed and treated more than 600 turtles since 1996 with the help of scientists and volunteers. Once their task is completed, they supervise the release of the turtles back into nature reserves and parks throughout the country.

There are several species of turtle and tortoise in Senegal, the most common being the African helmeted turtle (pelumedusa  subrufa). If you are lucky, you can also get a glimpse of the African spurred tortoise (Geochelone sulcata), the biggest turtle on the continent, that can weigh up to 100 Kgs and live as long as a 150 years. But it also holds a sadder record: it is the most threatened reptile in Senegal… a sad fate shared by most species of turtles in the country.

Threatened by abuses from humans, traffic and the impoverishment of natural resources and deforestation that deprives them of food, turtles really do need a center like the Turtles’ Village for their survival. That is why Lamine and his colleagues tirelessly crisscross the country in order to find and shelter sick turtles.

We have recently witnessed the fact that we can all help Lamine:
A few weeks ago, a sea turtle had been captured by a fisherman, for obvious commercial purposes … so he wanted to sell it, but fortunately did not succeed. Was he asking for too much money? Did the people, whose awareness on the matter is increasingly raised, refused to buy it? We do not know. What we know is that the rumor spread that a sea turtle was being sold… a young tourist heard about it. She had just visited the Turtle’s Village so she called Lamine right away. He immediately came to pick the turtle up and bring it back to the Village where he placed it  in quarantine. After 24 hours of observation, it turned out that fortunately, the turtle was behaving normally and didn’t carry traces of abuse.

The next day, Lamine and his friend Thomas informed the Minister of Environment, our ecopartner Haidar el Ali, who advised them to bring the turtle to the Oceanuim in Dakar. As you may know, all environmental activits in Senegal gather at Oceanuim. They helped Lamine, and offered him a boat so he could release the turtle in the open sea.
So the turtle regained the sea, and its freedom. A story that ends well…

You too, if you find yourself in a similar situation, if someone offers to sell you a wild animal, please contact the Oceanium or Ecofund: we will help you!

Actually, in order to facilitate these actions and alerts, we will soon launch our Ecoforum, that will allow you to alert professionals via the Web or text messages, so that other captured animals can get the same happy ending as this turtle! 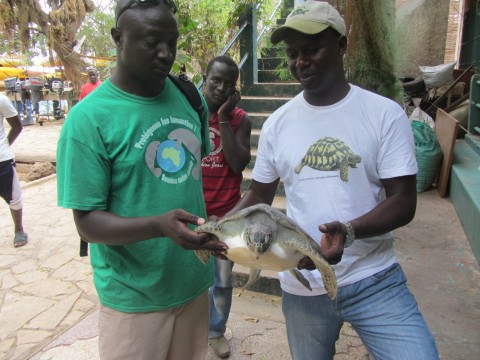 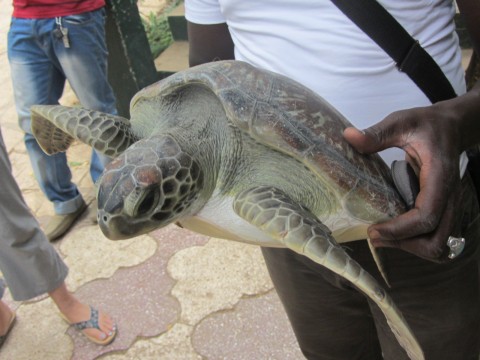 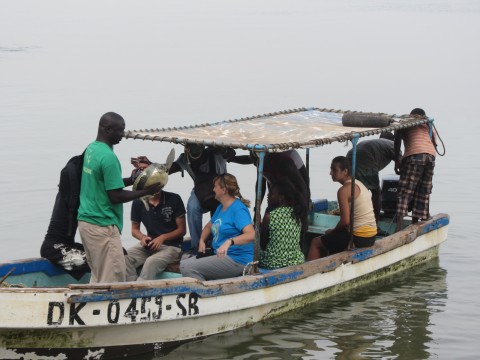