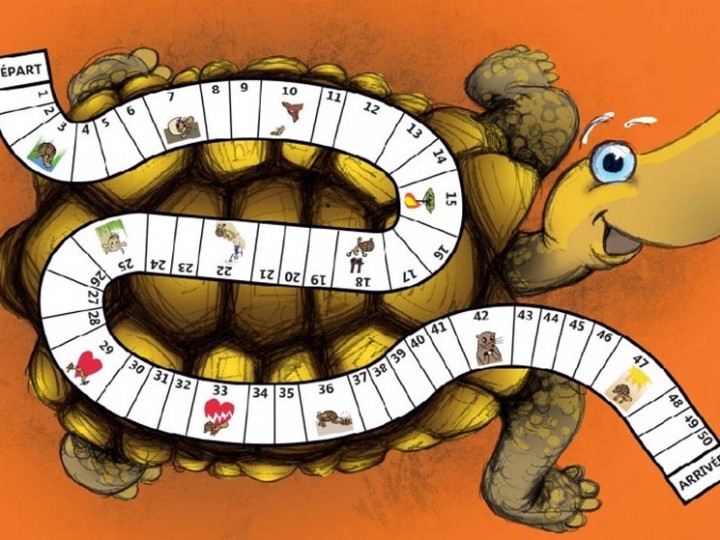 Today’s children are tomorrow’s leaders and stakeholders who will be involved in the implementation of political and environmental decisions in their country. It is important that they are aware now of the importance of protecting their environment.

This project is part of the Ecofund’s collaboration with SOPTOM on the "Nature Geniuses Competition" and the "Nature excursions" projects which encounter a big success among the Ranérou school children.

The Sulcata turtle (also known as the Furrowed turtle because of the stripes on its shell) is one of the emblems of the African wildlife. Protecting the Sulcata turtle will help maintain biodiversity in the Sahel region; mainly because of the deep burrows the turtle makes while seeking shelter in an extremely harsh environment. These burrows are helpful to other species such as wart hogs, reptiles and hyenas.

Through the "Turtle Game" Children will become aware of the environmental threats to these turtles and to their region. It is a board game designed according to the rules of the well-known game of Snakes and Ladders. The rules of the game are as follows:

Each player throws a dice to move along a track of numbered spaces illustrating the challenges of the life of a Sulcata turtle. The aim of the game is to help a turtle to avoid threats and predators on its path so it can survive the rainy season. For example, a player who lands on space #18 is unlucky because this space says that the turtle has been hunted by someone, and since hunting constitutes a serious threat to this species, the player will have to start the game from the beginning. The first player to reach the end of the track (the finishing point of the game) becomes the winner.

Beyond the fun for all age groups, the game allows for knowledge transfer on the Sulcata turtle. The knowledge transfer will be done in collaboration with the Inspectorate in charge of Education and Training (IEF) and with the school teachers. Furthermore, a project team member will travel to each school and explain turtles’ life cycle to the school children. The game can easily be adapted to suit children’s educational level.

The game and all hereto related activities will bring attention to the Sulcata turtle and raise awareness for its protection. School children and their parents will be involved in this awareness building process. This project is not only about creating awareness on the need to save this symbolic species - that is becoming rare - but it is also about the sustainable preservation of the ecosystem where it is found.

Melle Awa Sylla, is the Champion of the project. She is a school teacher in Katané, a village leading to the natural reserve of Ferlo, where you can find the scimitar oryx, dama gazelle, dorcas gazelle, and the furrowed turtle. Awa is very excited about the Turtle game and impatient to play with their pupils and to teach them to protect their natural environment in general and the sulcata turtle in particular.

Your donation will help us to design and produce the game (printing, making tokens, purchasing dice and paying for materials delivery). It will also help to finance with training of teachers.

Dear Ecofund Community, please find below the accounts of donations to the project "Turtle Game" and its expenditures.

Thanks to your donations (balance from the project “The furrowed turtle”), and thanks to the contributions from Itancia Foundation and the printing house “Atelier 14”, the project team has been able to design and produce the game (printing, making tokens, purchasing dice and paying for materials delivery). 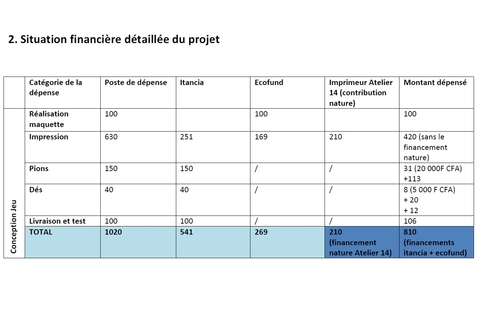 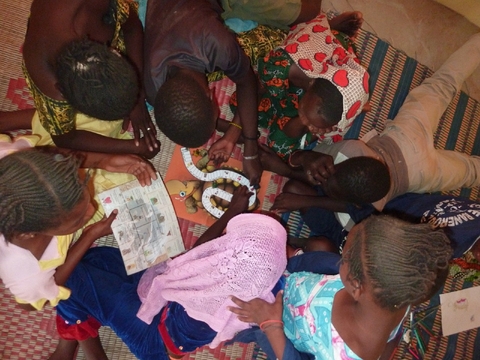