The wide distribution of the African Palmyra palm (Borassus aethiopum) – a tree from the Ethiopian plateaux – is greatly due to the migration of elephants. Legend has it that an ancestor who travelled extensively has come back, to Africa, with all the secrets of its richness.

In Senegal, the African Palmyra is called the “Guardian of the savannah”. This tree is nest for birds as well as shelter for insects, rodents and other animals fleeing fire outbreak because it resists well against bush fires.  Everything is good about the African Palmyra (also known as the Ronier palm), a tree that is 100% useful. Beds, chairs, shelves, baskets and brooms can be made from it. Strong and resistant, the central nervure of the palm is mainly used for making furniture. It is also used for calming stomach upsets and deworming.  If properly managed, the utilisation of the Palmyra does not generate any waste or cause wastefulness.  Thus, it represents for the Sahelian African villagers a true heritage that is invariably reproductive.

In Kédougou – distinguished by the richness of its forests as well as the extent of deforestation there – it is customary for the Bassaris to tap palm wine, bounouk. Today, as the Bassaris continue this age-old wine-tapping tradition, they forget that this resource is almost being used up. The consuming penchant for palm wine has dire ecological consequences. One tree produces an average of 7 litres of sap per day. Tapped this way for 30 or 40 days, this tree dies after producing 200 to 300 litres of sap. And the numbers of Palmyra continue reducing drastically. “What will remain for future generations if these palms trees are tapped to their last drop?” is the alert given by Haidar in his film.
Dead while standing, and completely sapped, its trunk is thus exploited. This is the problem with loggers. Once cut down, the Ronier’s trunk is cut up lengthwise. Poised at opposite ends, loggers do not waste time splitting it up. The trunk breaks up along the lines of the fibres of its white surface. The rotten bark is very popular in shipyards and in the construction of bridges and structures. A big tree provides about 20 boards. Several trees are therefore needed to build one house. At a 30cm growth per year, the Ronier needs more than 30 years to attain its maximum height, and unfortunately less than 30 minutes to be cut down.

After following the Bassaris sap tappers, Haidar went to Fandène, 7 kilometers from Thiès.   His camera captured carts pulled by donkeys carrying huge loads of fresh palms, in finely woven baskets, stacked along the roadside. Young Roniers of different heights could be found further down the road as a sign of good management. Fandène villagers do not just think of cutting down these trees. They have been growing these trees for a long time now to safeguard their children’s future. Fandène has thus become the biggest Ronier forest in Senegal.

The Palmyra is a fabulous resource for West Africa though depreciated, alas, by laws and men alike. 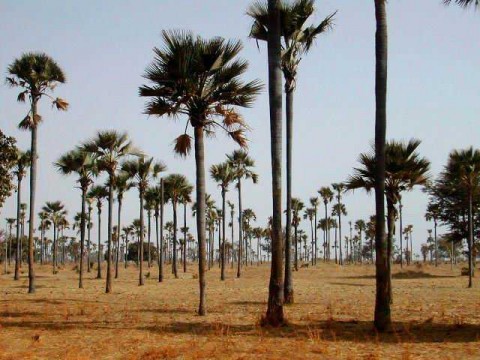