Thanks to diving, I was able to discover marine habitats with high biodiversity. Among all the species, my attention was drawn to a snail largely found in warm waters and temperate regions of the world. Called Cymatium perthenopum, this latter has a very nice color, and though it is edible, it is still not well-known in Senegal. At first sight, I thought I was looking at a rock as its shell was covered by other sea organisms that helped it to blend into the decor. But once "unmasked", it was difficult to detach it from its base as it was well stuck to it!

Also known as Hairy Triton or hairy monoplex in reference to the hairy periostracum the most external part of the shell. The Cymatium perthenopum belongs to the Annelida family (i.e. worms). The shell is rather massive, brown in color with wide and thick edges. My catch measured 116.60 mm high and 59.70 mm wide. The perimeters are barely segmented and angular, with fine longitudinal stripes. The columella (edge of the shell near the opening) is folded. The labrum (outer edge opposite the columella) is jagged

The off-white body of the animal is spotted with large black dots giving it an aesthetic beauty. When it retreats into its shell, only its operculum is visible (a corneous or calcareous lid through which the snail can close its shell), thus protecting it from predators.

My specimen was caught 14 m deep on the rocks, but the species is found on all types of sea depths, from tidal current areas to areas as deep as 150 m.

The Triton snail is a nocturnal predator; it feeds mainly on bivalves, other gastropods and echinoderms (a group of marine animals like sea urchin and sea star etc.). If I get to master my diving skills, I may perhaps be lucky enough to observe them at night!

Fertilization occurs internally. The female lays eggs for 4 to 6 days in a capsule in the form of cup and incubates them for 16/18 days. Larval development lasts half a year (175 days).

Spread out over a broad geographic marine area, the Triton snail is not a threatened species but its biomass in Senegal remains unknown since the species is not yet well-observed. For this reason, funds must be made available to researchers for the study of the aquatic fauna of Senegal, to know it in order to follow up on its evolution. Much remains to be done in malacology (the study of molluscs) in Senegal for a better management of our environment. This is motivating for me!

The magnificent Triton of Naples’ shell is used as a decorative object, but the species is also edible and tasty especially when grilled and spiced up or simply boiled!

Some studies on this species have shown its use as a bio-indicator of marine pollution such as the pollution by tributyltin (TBT). This biocidal substance that contains tin comes primarily from anti-fouling paints applied on ships. They were totally banned from use in 2008 (fortunately, because they were too harmful to aquatic life).

Commonly used in art as a decorative object, our gastropod appears on some paintings because of its beautiful shell.  This species is considered in some regions as harmful due to its predatory activity in oyster parks. Its harvesting in the West African sub-region is not so significant. 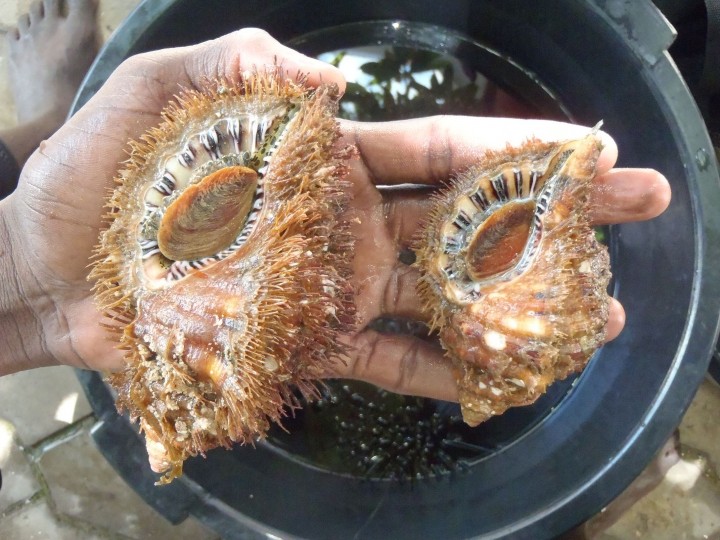 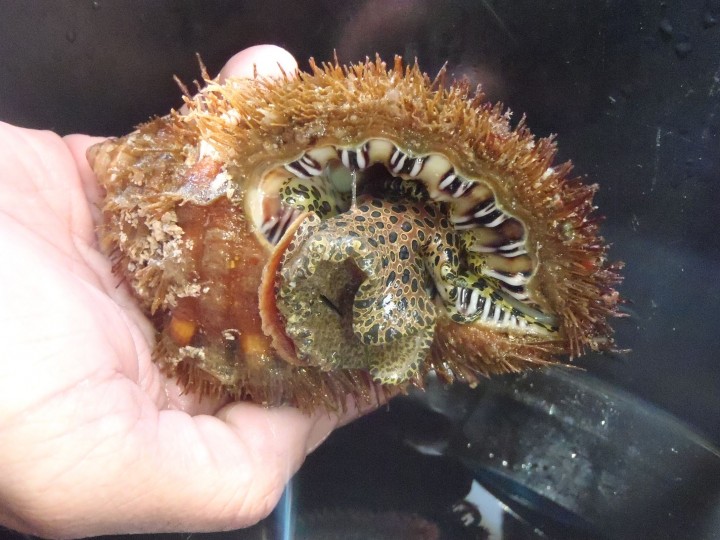