October is the month of the black tern at Dakar, Senegal. Last regular counting (2007) has recorded a maximum of 29,000 birds past Ngor over three weeks, though the authors recognise that this total may include some birds counted more than once. However, Dakar’s Cap Vert is shown as one of Africa’s three critical sites for black tern at the informative and elegant Critical Sites Network Tool website. The other sites are the Densu Delta and Songor Ramsar Sites in Ghana.

What black terns do for most of their time in Africa is something of a mystery and, compared to many waterbird species, the size of their breeding population is not well known, as the species ranges over a huge area of Russia and does not nest in large, easily countable colonies. Dutch research is summarised in Van der Vinden, J. 2002. The odyssey of the black tern Chlidonias niger: migration ecology in Europe and Africa. Ardea 90. 421-431. For those interested, a Google search on this article or the journal Ardea will allow you to download and read it.

In global conservation terns, black tern is of « Least Concern » and is abundant; 500,000 to 1,000,000 birds from Europe and Russia migrate to Africa, the vast majority to the east Atlantic, and another 150,000 to 750,000 form the New World sub-species. In The Netherlands, birds gather in huge numbers and on commencing migration fly high and it is thought direct to West Africa, where they are abundant at the well watched Banc D’Arguin, Mauritania, in September and October.

This photograph is from Ngor, but in May, showing the return migration of a small part of a large mixed flock, feeding close offshore with common terns, to give some impression of the spectacle. After October numbers decline and their location mid-winter is not known. It is speculated they may be out of sight of land in the Gulf of Guinea. The need to pick fish off the surface is assumed to require them to follows upwellings or whatever oceanographic features may make prey accessible (unlike larger terns they cannot dive to any depth), but where most birds are in these months remains a puzzle. 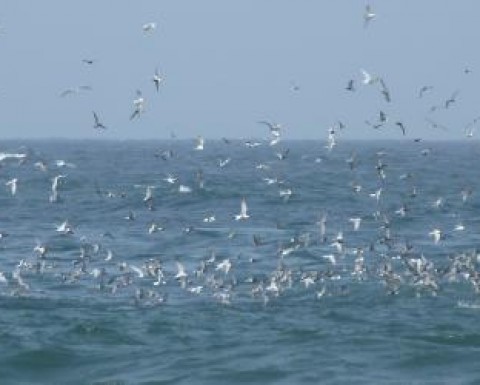