Climbing to the mountain of urban waste

Upon arriving in Keur Massar, the first smell you notice is the stinging of burned plastic in your nose and throat. This section of Dakar’s suburbs contains the biggest garbage dump of Senegal: Mbeubeuss. To get there you just have to follow the lines of trucks; filled to the tip with all the trash only a megalopolis like Dakar can produce.

Day after day they unload tons of garbage; ready to sort, burn or salvaged by the population of the dump. To take our photo on the mountain of waste, we were relying on the element of surprise so as not to waste time on bargaining for an authorisation. Bad idea, since the person giving you the authorisation might not have the authority to do so in the end. You should know that Mbeubeuss has it’s own population, territories and rules.

After having caused a small turmoil, we finally found someone with enough authority to calm everyone down. After long discussions about the price we were finally able to get the authorisation for the next day, same time.

Mbeubeuss is an artificial mountain range dumped in the middle of a green swamp. The accumulation of burned garbage and compost, aggravated by the trucks heading continuously towards the summit, where they literally have created a mountain on the slope of which sprout fires which create a thick black smoke, give the place a taste of Armageddon. Here and there you find random shacks where the workers of Mbeubeuss reside, some with faces disfigured with skin diseases, which no doubt originate from this wretched place.

An old woman digs in the trash looking for something eatable or something to buy food with. 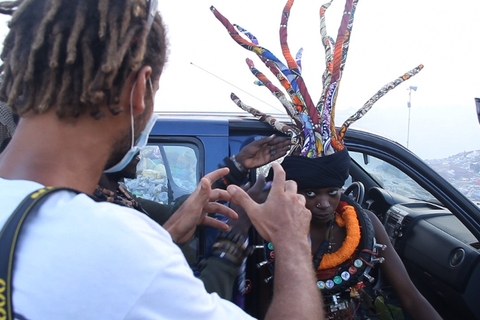