Coastal erosion: A natural phenomenon made worse by humans

What is coastal erosion?

Coastal erosion is the landward retreat of the coastline due to both natural and human phenomenon. In Senegal, it is one of the 4 major environmental threats.

Coastal erosion as an anthropogenic (human related) phenomenon though the unregulated or illegal removal of entire sections of sand from beaches and shores. This is largely due to an increase in urbanization, and a subsequent growing need for sand for construction.

Coastal erosion as a natural phenomenon as the sea continues to encroach shorelines Due to the effect of unregulated greenhouse gas emissions on climate, the removal of sand and the deforestation of filao trees that often border shores, seas are passing their natural boundaries.

The consequences of coastal erosion are threefold:

- Ecologic: absorption of pollutants by the soil exacerbates marine pollution. The disappearance of entire ecosystems (crabs, shellfish, birds etc.) is already in evidence.

- Socio-economic: with the decline of seaside tourism, thousands of jobs in both the hotel and artisanal industry are threatened.

- Socio-cultural: beaches are important public spaces for community exchange and their disappearance has a negative impact on communities.

Governments, increasingly conscious of the severity of the phenomenon have begun efforts to mobilize and reduce man’s ecological footprint. Nature’s own rhythms, cycles and timing promise it will be some time before we see results. 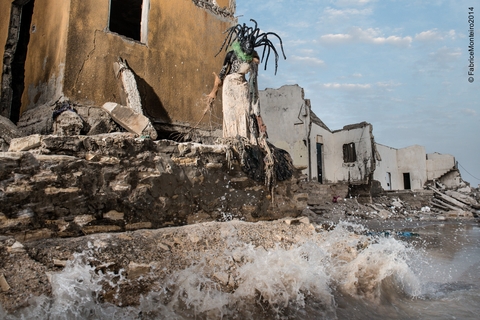