A polluted ocean where thousands of fish die: due to lost nylon fishing nets this nightmare has become a real time catastrophe for the marine ecosystem.
Monofilament nylon nets are cast in zones attractive to fish. Unfortunately, when they get caught on rocks or on sea bottoms, they can no longer be used and fishermen are forced to abandon them. Fish caught in them die uselessly, attracting other larger predators that also get trapped. Since we know that these nets take about 400 years to disintegrate completely, we can imagine the consequence of this ecological disaster (loss of fish species and pollution of waters), which might be otherwise avoided.

Badou Kane and l’Océanium de Dakar don’t want surrender in front of this catastrophe vision. From the 1st to 31st of Mai 2013, they organize sea outings, twice daily, with 16 French volunteer professional and many amateur divers from Senegal. Together they will pull lost nets from the site within the Dakar region: Goree Island, National Parc of Madeleines, Bay of Dakar, Mbao, Hann, Rufisque, Kayar, Ngor Island and Mbour.

Help our champion, Badou Kane, and Oceanium to recover lost nylon nets from the ocean next to the fishers’ community of Mbour. 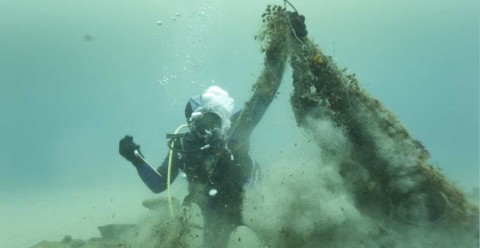