A humorist once wrote: "an oyster is a fish built like a nut," Pteria sp oyster, is something like that…

When I was five or six years old, I was picking sea shells on the shores of Dakar suburbs. I could never have imagined that there were living organisms inside these cockles.

It was after my diving ‘baptism’ that I had the opportunity to observe them in their habitat (scientifically called biotope). I have been fascinated by the way in which some bivalves (aquatic molluscs with two distinct separated parts that are more or less symmetrical), attach to rocks. As a natural base to many other living things (Cnidaria such as sea anemones, jellyfish, corals or other molluscs and algae), bivalves have developed a system of camouflage to escape their predators such as some boring gastropods (Netica SP) and non-borers (murex). This is what prompted me to choose the Pteria SP oyster, a species of the pearl oyster family. With its hiding system, the harvesting deserves special attention because for the uninitiated, it may go unnoticed…Diving has thus helped me tremendously in my scientific exercise!

The Pteria SP oyster is closely related to the pearl oyster of the family of Pteridae and the Pteria genus. Its shell which can measure from 35 mm to 280 mm, is thin, fragile and can have a very variable form: oval, circular and sometimes very elongated on one of its sides, calling to mind the wings of a bird. Its hinge, the part connecting the two valves on the thickest side of the shell, has no tooth. The animal has no foot but a very developed adductor muscle running along the central part of the shell. It is this muscle that ensures the closure of the shell

The specimens collected were found at a depth of 12 m. They attach to rocks through a secreted bundle composed of a set of filaments or threads called byssal.

These bivalves are biofilters. They feed on food particles (organic and inorganic) suspended in the water.

The sexes are separated, but we have no precise information on their reproduction.

Apart from the pearl oyster, edible Pteridae are not, as far as is known, highly harvested.

Although many bivalves in this family can secrete pearls, the Pteria is not used for this purpose. Long confused with the oyster, and later with Saint James shell, the Pteria is mainly sold by women on Soumbédioune beach in Dakar. The species is eaten fresh and grilled. Sellers even attribute aphrodisiac powers to these shells!

In Senegal, the empty shells of this species are used for decorative purposes. However, some ethnic groups such as the Sérère use them for building "Bankos" (huts built with clay). Indeed, after burning the shells, the calcareous shells are used as a binder for the whitewash. 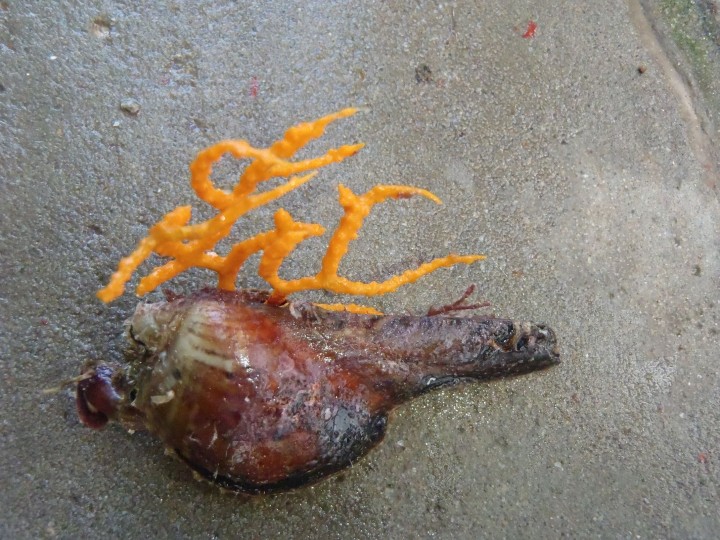