How did you learn to dive?

“On my own. I put a mask on to be able to see in the depths. I snorkeled. It required a lot of concentration. I dove, I dove! In the same way, I would bicycle around the continent, slipping away for fifteen, twenty days at a time, on a whim, not even telling my parents, I would disappear at sea. I never realized how much worry I caused the people around me. It’s only when I discovered real life, and all its social responsibilities – wife, children, family, parents, and work – that I began to slow down a bit. I began to be great snorkeler. I could stay under for longer than three minutes. I began to barter with Russian ships. I would trade fish for caviar, for tools and parts and then I would resell them. One day, I traded some fish for a diving tank. I filled the tank with Air Liquid (the name of a Dakar based company). I never liked that tank. You would fill it, dive thirty, forty minutes and then it would be finished. And snorkling, you could dive all day. I never used that bottle again until I became an explorer of shipwrecks.”

“Yes. I began to search for the wreck of the Governor General of French Occidental Africa, Pierre Boisson, loyal to the Vichy government. It should have left the country after opposing the attempted landing of General de Gaulle, but the boat and all its booty sank somewhere between Bargny and Mbour. When I located it, I found a lot, but nothing of value.”

As an explorer of shipwrecks, Haidar searches through scraps, extracting pieces that seem interesting. He finds old bronze pieces, canons that he sells for a living, hoping all the while to find his lost treasure. 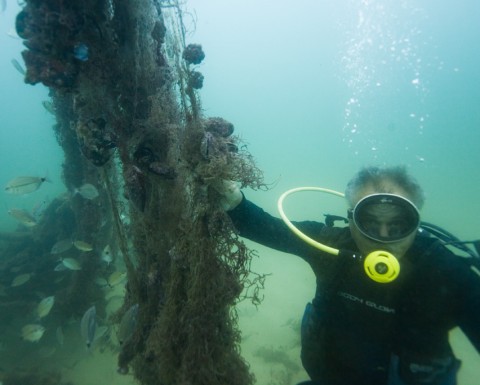