Since December, in collaboration with Buchet-Chastel on our Ecoblog we share with you the memories and testimonials gathered from the Imraguen by writer Marie-Laure de Noray-Dardenne during her stay on the Banc d’Arguin. Their memories, their words and their lives paint a series of portraits, taken from her book « The Book of the Imraguen » (published in 2006 by Buchet-Chastel Ecologie.)

1. Good morning Marie-Laure, can you tell us a bit about you?
In my work and in my life, I have been close to the African Continent for 20 years. First I lived in Mali for two years, as a volunteer in charge of Information and Training aimed at French volunteers. When I came back to France, I wanted to continue working in the development field. So I took a Master’s degree in Communication, then I studied Sociology of Development while working for an NGO. I got married too, I had two children, and then I went back, with my whole family, to Mali, where we stayed for five years.

2. Would you define yourself as a Nature writer?
It’s really at the heart of my work. In fact, I try to mix the craft of a writer to a qualitative approach of sociology. A medium like “The Book of the Imraguen,” is a magnificent way of doing my job. I feel more like a spokesperson than a penholder! I try to be a part of sustainable development through people, inhabitants, and I try to make their words and even their emotions come closer to the surface. I create books for these people… especially the one on the Imraguen. It’s their book, which is why I chose this title.

3. Have you written other books on this subject?
Many years ago, I was an Associate Researcher at the RDI, working on a program dealing with the interior delta of the Niger River; the photographer I was working with and I went and met the people living in those floodplains; I listened to what they thought about the program, and I wrote a book on the subject… one could call it popularization of science – although I don’t like the word. Later, the UICN contacted me and asked me to do the same kind of thing in Cameroon, a kind of crossover of human groups living on floodplains. But this time, I wanted to work with local school kids who were members of Nature Clubs. We gave them disposable cameras. Some of them proved to be excellent photographers!

4. How did you hear about the Banc d’Arguin? And about the Imraguen?
The FIDA, the Foundation of the Banc d’Arguin, is a partner of UICN. I suppose they liked my previous work. So they suggested a somewhat similar format, but this time we were going to compare the fishermen of the West African Coast: the Bijagos, the Imraguen and the Saloum fishermen! A huge endeavor! And then, for various reasons, the subject matter got restricted to just the Imraguen. The project took two years, during which I carried out four missions to the Banc d’Arguin, in total immersion. It took some time for me to travel, understand, collect, mature. I didn’t think the women would enjoy so much freedom of speech…I felt immediately at ease.

Interviews would take so much time...It’s very hot… you drink tea… One night, as I went to bed, I realized I had drunk 21 cups of tea that day! I told myself it was time to stop and start writing, even though it was hard for me to just take out my notebook! All in all, I think I spent two months and a half there. This book is a collaborative communications project. I gave the women and the fishermen cameras…in between data collecting missions, I’d have the photos printed on A4 paper and people would comment and choose the best pictures.

5. Publications on the Banc d’Arguin tend to focus on its natural heritage. But in your book, you yield the floor to the Imraguen, the inhabitants of the Banc d’Arguin.
Exactly. I did it on purpose. It’s true that publications on the Banc are often historical. I think they are kind of angelic, too idealized: fishing in symbiosis with dolphins…I tried to avoid this kind of classic stuff. I wanted to enter the everyday life of the Imaraguen, to understand their paradoxes, as they live tucked between nature and city. They perfectly symbolize the pros and the cons of living in protected areas… areas not always protected in the direction of the inhabitants. They make us question the more general problem of land: to whom does it belong? I am very proud of the foreword, written by Abdou, a professor in Sociology, who talks about this very point.

6. Do you know Sidy Ely, our champion, and his initiatives?
I do know him! I even interviewed him! He had lots of ideas! We talked a lot about the welcoming of tourists. It was very interesting. He was very curious, had lots of ideas and energy!

7. Precisely, are there any initiatives on the Banc that you particularly like in an environmental point of view?
Setting up a shipyard on site, to rehabilitate the “lanche” as the primary means to fish was an excellent idea! It has provided an alternative to the interdiction to fish with an engine, has created a high quality craftsmanship and know-how, and illustrated a useful and rich North-South exchange of experience.

8. Our future is green! Do you think your book and an initiative like Ecofund can have a positive impact on the protection of the environment?
A book is a book, and a website a website, but I really believe in this kind, among others, of links between people from here and from elsewhere, from the South and from the North, from the water and from the land, from the desert and from cities. The more we multiply places where exchanges can occur, the more we provide platforms to those who don’t normally have one in today’s communication landscape, the better for everyone!

9. What will your next book or article be about?
I would love to write a collaborative book with the inhabitants of the Sine-Saloum, in Senegal. If an NGO or an institution wants to contribute, I’m ready to go! I’ve also just finished writing a children’s book titled “The Odyssey of Houmarou”, an African version of Homer’s texts and it takes place along the Niger River. The Pantheon is made of divinities from the Fulani, Yoruba, Bambara and Songhaï people… my co-writer Antoine Barral took charge of the Illiad.

In a different genre, I’m finishing a guide on the integrated management of natural resources for Members of Parliament and Elected Representatives of the seven coastal countries from Mauritania to Sierra Leone, Cap Vert included. The guide was an initiative of UICN Senegal. I also have a collection of short stories in the works, based in Africa, as always. 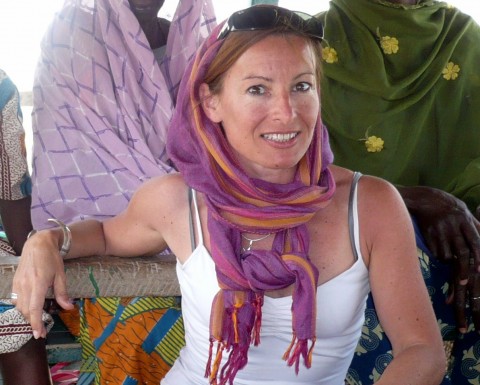