Launch of the Fundraising for the 5th PROPHECY Photo

Today we start the fundraising contest for the 5th PROPHECY photo. The deadline is Mai 31st 2014.

The donor who contributes the most to cover the technical expenses for the 5th photograph will receive a dedicated print of the PROPHECY photo: Air pollution

The 5th photograph was taken in Dakar, the 2nd most polluted African city. Dakar suffocates from vehicles too old for Europe but imported and still used in Africa. Consequences ?

The Djinn appears in the middle of the urban traffic with boots made of old tyres, dressed in traffic reflectors, with a hat made of steel from “car rapid”, and with a night stick in his hand.  He stands up against the air pollution and calls us to “stop this suicide!”

Support the PROPHECY project by helping us cover the technical expenses and win a dedicated print of the 5th photograph! 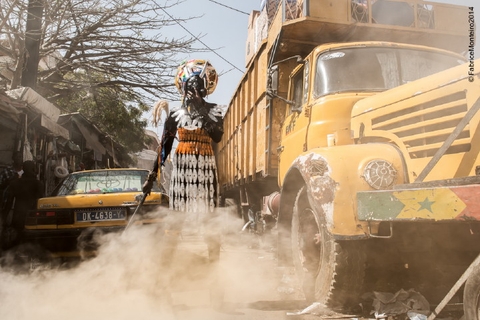