Of Sharks and Rays

The waters of the Banc d'Arguin don’t always seem to be inhabited. Certainly we have come across smiling dolphins, wriggling sea bass, shining mullets, or even spouting clouds of crabs more frightened than hurt. But, at the entrance to a sea channel, one can also come across shark. There are all kinds, but do not believe their seemingly sleepy eyes, some are quite dangerous and will regularly attack. Sharks, and their cousins rays, have never interested the Imraguen, they prefer the fine white flesh of mullet or sea bass. We often saw foreign fishermen, West African, Ghanaians and Malians, stock up on rays, to eat or sell to restaurants in larger cities. But such low level fishing has not really disrupted the community of selachians (the scientific order of rays and sharks), who thrive in the rich waters of the Banc.

But during the nineteen-eighties, due to an increased demand by Asian markets, food companies began to seek shark, more precisely, shark fin, to satisfy wealthy customers in love with this rare so-called delicacy. For some years, Imraguens devoted themselves to this demand, even adapting their fishing nets, spurred by specialized wholesalers who had found the proverbial goose that lays golden eggs. Piles of sharks carcasses littered the surrounding villages in mass graves, sacrificed solely for their fins. We fished so recklessly and in such great numbers that in a few years, the survival of these long-living species with particularly slow reproductive cycles, became in great danger. Researchers were alarmed and the Park decreed an in extremis ban on fishing. The only catches now permitted, are accidental: rays and sharks caught in nets intended for other fish, like mullet and croakers. The Ghanaians and Malians are still there, and buy at very low prices these few selachians they immediately salt and brine, before exporting them.

The first year after the ban, we were quite affected, and even became annoyed. We were forced to give up a prosperous fishing trade that had become a habit. Still we did it. And that year the mullet catch, then that of croaker, were very good. At least, all was not lost. The ban on shark fishing has adversely affected us. Before, you could buy several good quality boubous in a year... Today we learn to do with just one!
Me, I have not burned my toyo net as it was requested, but I use it as a canopy for my Tikka.

We, the Imraguen, are always willing to respect nature, that is why we accepted the ban on shark fishing. But still ... One day in Portugal, I saw hundreds of tons of shark on a boat. I remember thinking: Europeans, through the Park, prohibited us from doing what they were doing elsewhere, and look how they were profiting from it! Shark fishing should be banned everywhere ..." 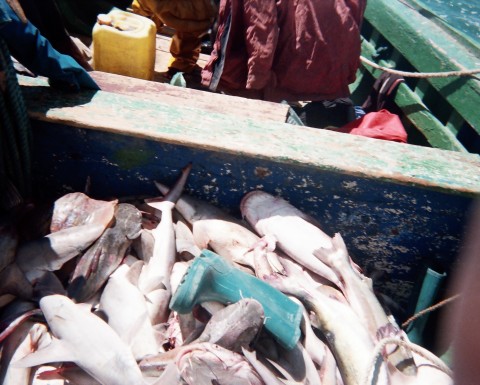