› Home › Green News › Ecoblog › PART ONE: The wonderful world of the forest.

PART ONE: The wonderful world of the forest.

Germany is a land of forests. A third of this densely populated industrial country is covered by woodland. There is 11.1 million hectares or almost 43,000 square miles of it – an area that has remained constant since the beginning of the 16th century. Hard to believe? Just list the most famous and largest German forests and the figure immediately becomes plausible. Density populated urban and industrial regions are interspersed with great islands of green, whether it be the Black Forest or the Harz, the Fichtel Mountain Range, the Thuringian or Palatinate Forest. The largest continuously forested area in Central Europe is the Bavarian Forest, which furthermore links up with the Bohemian Forest in the Czech Republic. This is also where you will find Germany’s largest national park, covering an area of over 12,000 hectares (46 square miles). It too merges with the Czech national park across the common border. Together they form the largest forest reserve in Central Europe.

At least 60 percent of German forests are covered by conifers, particularly spruce and pine. But among the deciduous trees it is not the once so highly praised “German oak” that holds first place, but the beech. Extensive beech forests, where the sunlight plays between the smooth, silver-grey trunks, are among Ger¬many’s most beautiful landscapes. In the spring of 2011, UNESCO awarded World Natural Heritage status to five near-natural German beech forests full of gigantic old trees. These forests cover approx. 4,400 hectares (17 square miles). One of them is the 600-hectare (2.3-square-mile) Grumsin Forest in the Schorfheide-Chorin Biosphere Reserve just an hour’s drive north of Berlin in the south of the rural district of Uckermark. Visiting the Grumsin Forest is almost like time travel: you really notice that the Ice Age has left its mark here as you hike through a craggy terrain of hills and hollows. It could hardly have been better protected from clearance over the centuries, with bogs, ponds and lakes between the trees – a natural monument of wood and water. But it is not so pleasant for humans here all year round: mosquitoes attack the wayfarer as if to make sure that the reserve’s recent UNESCO fame doesn’t attract too many visitors. 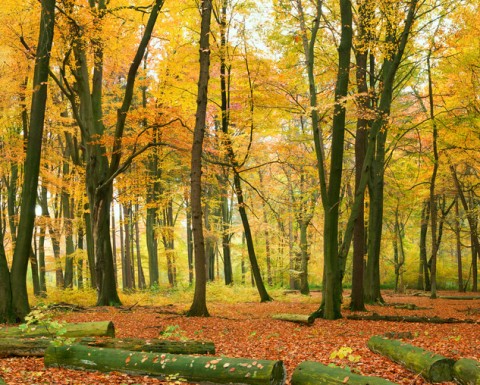