Where: Just 4 U, Dakar, Senegal

What: ‘Dedicated to the protection of our planet Earth, the only home we all share’: this symbolic dedication of his album ‘YEREDON’ and a perfect performance of the Mandé Charta inspired Mao OTAYECK for the show ‘ROCK MANDINGUE’ in association with the choreographer Marianne NIOX and her dance company ARTEA.

Mao OTAYECK, son of the ancient Mandé Empire, initiated by the Dozo hunters in Baro, (Guinea), a metis symbol of the musical « no limit », is behind the concept of ‘ROK MANDINGUE”, mixing eclectic African sounds with rock and soul music. 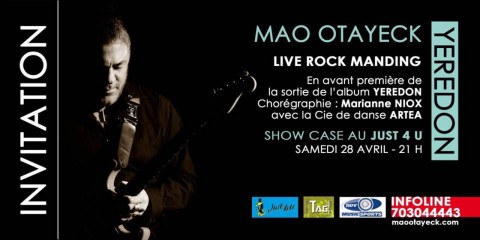