For several decades have the effects of global warming been evident around the world. Climate change has an impact on the coastlines, the biodiversity, the populations that depend on maritime resources and the environment of the coasts, especially in the zones with low depth like the estuary regions, often protected by a string of narrow dunes and endangered by human interference.

In the Parc National du Banc d’Arguin in Mauritania (PNBA) the local population, the park officers together with national and international partners act in order to stop the process of erosion of the island of Nair. The island of Nair is one of the major sites for the nesting of the subspecies of the Spoonbills of Banc d’Arguin. The island of Nair is also an important reproduction site for other species of waterbirds and a refuge of the high tide for millions of migratory shorebirds.
Between the 21st and 23rd February 2013, the PNBA organised along with the FIBA, l’Association des Amis du Banc d’Arguin and the Youth association from Iwik, the first intervention of the year, to rehabilitate a sting of dunes on one side of the island.

For the first time since the launch some years ago, the volunteers from Nouakchott, the capital of the country and the Dutch researchers assigned by PNBA, have been accompanied by 17 young women and men from the Iwik village. During the rehabilitation intervention, 400 biodegradable jute sand bags have been deposed on the critical points of the southern zone of the island where the most important colonies for reproduction are situated. The results of the past efforts are remarkable and very visible on site. The typical halophile vegetation of this zone has developed a lot thanks to the bag-barriers and the rehabilitated zone of the island unveils a remarkable resilience to floods, a great source of hope for the future. 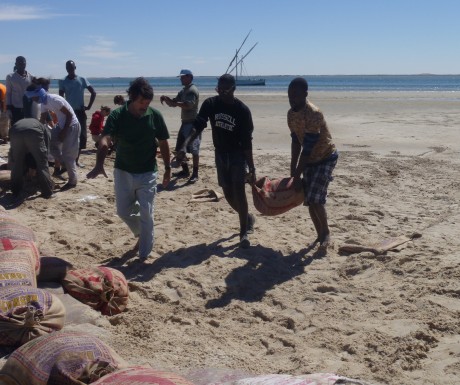 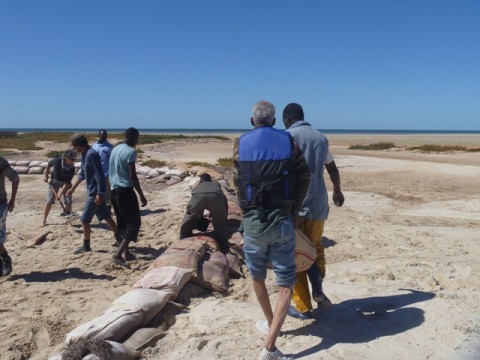 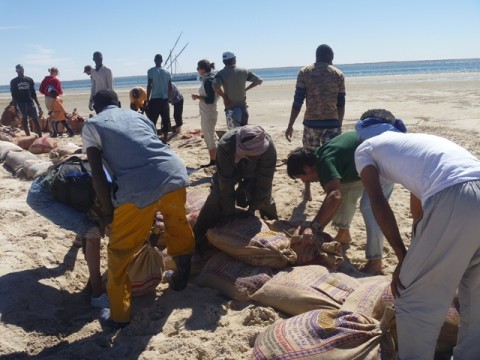