The Djinns's cry for help over the impacts of erosion

It was in Bargny, which is about 20km from Dakar, that Fabrice “caught a glimpse” of the Djinn (spirit) emerging from the huge stones, washed-over, constantly, by sea water. The Djinn was obviously troubled by the condition of the abode from where it emerged with difficulty.

Erosion, which is at the core of this revelation, is a global phenomenon seen in many inhabited coastal regions of the world. Due mainly to the impacts of erosion on the Atlantic Ocean, this latter is advancing at an estimated average of 2 meters each year along the 700km stretch of coastlines in Senegal. Researchers such as Mr I. Diop Niang, a geologist and assistant professor at the University of Dakar, Senegal, surmise that erosion occurs due to a combination of natural factors such as (sea surges, strong winds, tides, strong sea currents), and human activities which have dangerously aggravated this phenomenon. To begin with, human activities produce the greenhouse gas emission, which is responsible for warmer atmospheric temperature and rising sea levels. In addition, building houses along coastal areas has not only been responsible for the disappearance of vegetation that stabilises sea beds but has equally distorted the manner in which waves break since sea surges do not dissipate naturally and properly.‏ Some types of constructions, such as sea ports, are therefore responsible for sediments deposition imbalance (with sediments input being lower than sediment loss) and this worsens erosion.

In Rufisque, close to Bargny, the erosion problem is more pronounced as seen through wind conditions, reversed and changing sea currents around the peninsula, and the slow tidal supply of sand to beaches; all these factors contribute to the accelerated encroachment of the sea on the land to the point where the Thiawlene neighbourhood was submerged, in July 2007, by at least 30 metre-high waves, leaving the inhabitants, till date, in shock. The socio-economic consequences have been and will be high if erosion is left unchecked (with the destruction of houses and infrastructures such as the neighbourhood cemetery etc). Strategies, put in place to check erosion through the building of infrastructures (dams and retaining walls) like the one in Rufisque, increase on the contrary, the impacts of erosion because sediment transport is impeded by insufficient current circulation. In addition to the Senegalese coastlines’ sand being deprived of sediments supply, it is equally and sadly, threatened by the human activity which consists in the sand extraction from beaches and the resulting increase in sediment deficit and erosion. Sometimes, the same villagers, who are victims of the impacts of erosion, are guilty of contributing to the problem - without knowing it or because they don't have any alternative economic options... So what solutions could be put in place to check this phenomenon given that the sea level continues to rise each year?

In principle, natural solutions should be appropriate such as the conservation or restoration of natural habitats (mangroves, lagoons, plant-covered sediment reserves behind beaches) for the protection of shorelines or the promotion of sediment-trapping sea grass to maintain shoals that help in scaling down and reducing the strength of the waves breaking on shorelines…

Testimonies abound: More than 60 years ago, there was a forest separating the neighbouring villages to Bargny from the sea and it was quite useful. People are now forced to relocate or to build further away from coastlines and beaches.

Here and there, be it Bargny or Rufisque or even up to Saint-Louis, erosion is not limited to these places but is threatening all the west coasts of Africa (comprising16 countries) and other regions of the world. Solutions will undoubtedly come from the increasing involvement of professionals in the tourism industry, local authorities and the government itself and equally from ordinary citizens to mitigate and even turn around the impacts of erosion. The Djinn in the prophecy seems to be pushing us to this awareness, and indeed, it might not be too late!

Photo by Oceanium Dakar “Sand extraction from a beach in Senegal” 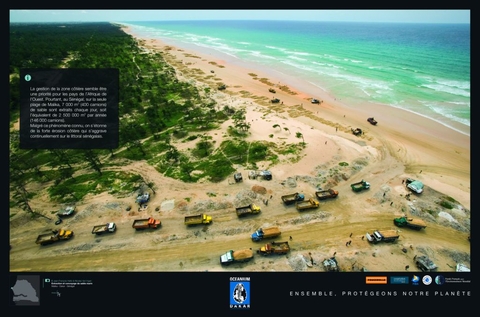