Today we start the fundraising contest for the 6th PROPHECY photo. The deadline is June 30th 2014.
The donor who contributes the most to cover the technical expenses for the 6th photograph will receive a dedicated print of the following PROPHECY photo: Bush fire

The 6th photograph was taken in Tambacounda.

Every year, between the months of November and May, bushfires burn more than 700,000 acres of forest and pasture lands in Senegal, causing an annual loss of about 30,000,000,000 Francs CFA (approximately 66,000,000.00 AUD). One might wonder why this yearly calamity continues to happen. Depending on the nature of human activities, the nature and cause of bush fires changes including nomadic pastoral activities, poor control of domestic fires, use of rudimentary methods for harvesting honey, and use of wrong burning methods etc.

The environmental impact of bush fires

- erosion and loss of soil fertility due to the destruction of  topsoil,

- degradation of forest ecosystems and disappearance of vegetation cover,

- increase in the level of C02 in the atmosphere, leading to a decline in ‘green spaces’ worldwide and increase in global warming.

The social impact of bush fires

In the rural areas of eastern Senegal, bush fires do not only destroy ecosystems but human possessions such as cultivated lands, livestock fodder, and homes. The consequence of this is the destruction of village lands, the loss of human lives (through the fire itself or due to the desolation caused by the destruction of harvested produce) and forced rural exodus.

The management of bush fires

Though this phenomenon has been deplored for decades, there seems to be no known means of controlling it in the most affected regions in Senegal (Ranérou, Tambacounda, Kolda et Kédougou). To address this problem, several urgent measures are needed:

- opening and maintaining of firebreaks: open air spaces that are mapped out and cleared of all flammable debris,

- reinforcing communication channels used for sending alerts during fire outbreaks and increasing the material and human resources needed for an effective suppression of fire outbreaks, 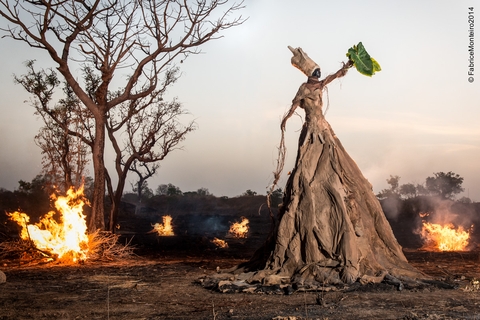