The Richness of the National Park of Banc d’Arguin

Located in Mauritania, the National Park of Banc d’Arguin covers 12,000 km2, an area comparable to the territory of Gambia, or 5 times the size of Luxembourg! Half land, half sea, since 1989 the park is classified as a world heritage site by UNESCO, and is one of the most important in Africa.
Dunes, mangroves, mud flats, reliefs or sand plains, the fascinating diversity of the Banc d’Arguin’s landscapes abounds with animal life:
The Park is home to over 2 million migratory birds from northern Europe. It is also home to a number of other species like the Great Cormorant, the White Pelican, but most of all the Spoonbill and the Grey Heron who do not reproduce any place else.
The Banc d’Arguin waters are some of the world’s richest fish waters, thanks to the phenomenon of upwelling: dominant east winds pushing surface waters out to sea. This movement provokes the upsurge of deeper waters, cold and nutrient rich, allowing for an explosion of phytoplankton. The Park’s sea space is nursery area, reproductive space, and important sources of food for fish populations, not only for Mauritania’s fisheries but also for the sub-region.
The marine biodiversity of the National Park of Banc d’Arguin is particularly rich; different turtle and sea mammal species are represented including the green turtle, bottlenose and humpbacked dolphins. The Park’s hundreds of monk seals, one of the 12 most endangered animals in the world, are one of the species’ last major colonies.
The Park’s challenge is to defend the totality of its natural resources and its ecosystems, threatened by overfishing, human development and climactic changes. Sidy’s observatories contribute to this effort. Along with the Imraguen community, the fishing peoples inhabiting the Banc d’Arguin for centuries, Sidi works for the conservation and sustainable management of this unique heritage. 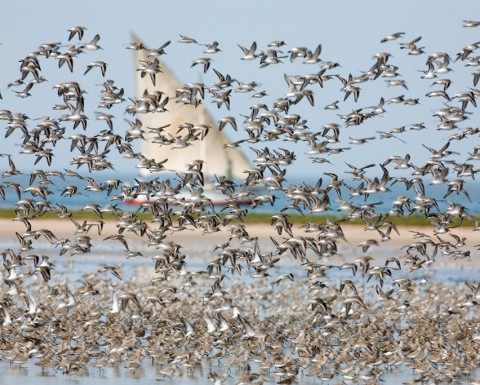