The sea was dying

The sea was a real pleasure. And then one day, diving, I watched bomb-fishing. Have you ever seen bomb-fishing before? Imagine a homemade bomb made from potassium nitrate. These guys throw one, two, and four overboard at schools of fish just as they are spawning. From underneath the water, I can see the carnage, the dead fish falling into the deep, the bomb’s ravage on the sea’s depths. Up there in the pirogue, they can’t see a thing. They collect what floats back up -- at the most 20% of what they have killed -- not at all bothered by what just happened since they never dive. But I saw the damage in its entirety. I even saw the innocence of the people on the surface of the water.

I bought a used camera, and then an old buoyancy tank that took in water! And I began to film. In the 1990’s, my ecological fight had just begun. I saw what the sea was subjected to, I saw all that beauty degraded. I saw magic places like Counakhéoff, off of Soumbédioune, where we dived, enchanted sites become rivers of shit! When I saw that, when I saw people bomb-fishing, the destruction caused by monofilament nets, those net with far-too-small holes, when I saw all that destruction, this human foolishness, I began to take up arms, in words and pictures.

The sea was dying. And I decided to protect a sea, who was otherwise mute. 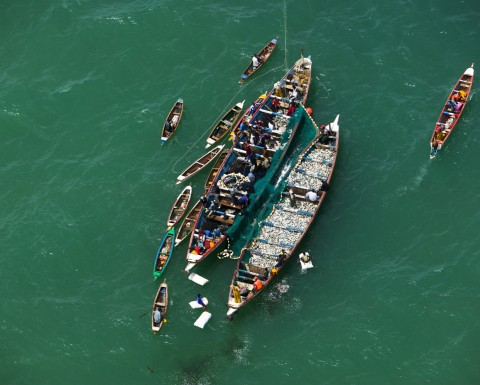